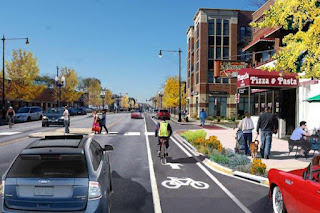 Lawrence Avenue has been selected by the Illinois Department of Transportation as a self driving car test corridor.  Apparently the new streetscape along Lawrence was an important factor in its selection, as the lower speeds, higher pedestrian usage, and the presence of moderately well traveled bike lanes makes it one of the more challenging environments for automated vehicles to navigate.  The corridor also extends four blocks on either side of Lawrence, (I.e. between Argyle and Wilson), from Lake Shore Drive to Elston.

“I know that many people are concerned about the safety of having driverless cars on our streets,” said Erin Aleman, the IDOT Director of Planning and Programming, in a statement. “But automated and connected vehicles are coming whether we like it or not, and it is important for the state of Illinois to have testing areas so we can develop a better understanding of how these cars work and will interact in our environment. Driving in California or Arizona is different from driving in Illinois, where snow and ice can make for an entirely different experience.”

Not everyone is thrilled about the new designation. Aldermen Pawar, O’Connor, and Cappleman held a joint press conference denouncing the designation. “Self driving cars may be coming,” said Alderman Pawar, “but they are not ready for our streets yet and our residents are not willing to be guinea pigs for Uber and the like to figure out how not to kill people.”

Nevertheless, just as for so many other noxious car-related problems (*cough* Lincoln Towing *cough*) it appears that the city council is powerless to stop this. The new designation takes effect today, April 1 2018, and according to Uber we can expect to see driverless car testing on our streets within a few weeks.

UPDATE APRIL 4th: IDOT and the Alderman’s office request that we officially inform you that this April Fool’s joke is not real, and there is no need to call them and complain about it.  Driverless cars may or may not come to Lawrence Ave one day, but this is not really it.